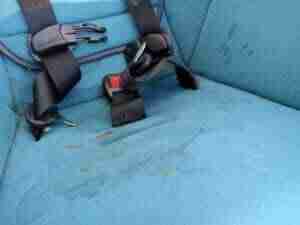 Ever wonder how clean baby gear is? We take an ATP meter to test three car seats. Each car seat had varying degrees of soil on them with different ATP readings. The results are rather spectacular.


Per wikipedia, an “ATP test is a process of rapidly measuring actively growing microorganisms through detection of adenosine triphosphate, or ATP.” The cool science part is that the enzyme used in the test swab is similar to that which makes fireflies glow. When the enzyme comes in contact with living microorganisms, it emits a little bit of light. The meter then measures that light and spits out a number. That number, however, is not a direct representation of the number of microorganisms on the surface, rather it is an indicator of such. A low number is good, while a higher number is bad.

Any number less than 35 is considered safe enough for food preparation in a restaurant. That means it doesn’t take much to get us sick. Imagine the fallen cheerio your child finds a week later after an explosive diaper you never managed to spend enough time cleaning up. Pretty unsettling, huh?

Before steaming and sanitizing these three child car seats, we took an initial ATP test of each. Here are the initial test results:

After our unique process of steam and pioneering application of probiotics, we then took a final reading. Keep in mind that since probiotics are living things, the ATP meter will pick them up in the test too. Not to worry though, probiotics are amazing at what they do and can reduce ATP for days (really!! It’s true!!). In our experience, the probiotics will take the ATP reading down to single digits in a matter of an hour or two. In these cases, we had to get the seats back to their owners so we couldn’t test that far into the future.

Here are the final test results:

The moral of the story is it doesn’t take much to get us sick. Keep your child car seat and other baby gear clean and sanitized. When you do that, your child’s risk of infection significantly drops.

If your child car seat can use a sprucing up and a thorough sanitizing, Germz Be Gone is here to help.

This website uses cookies to improve your experience while you navigate through the website. Out of these, the cookies that are categorized as necessary are stored on your browser as they are essential for the working of basic functionalities of the website. We also use third-party cookies that help us analyze and understand how you use this website. These cookies will be stored in your browser only with your consent. You also have the option to opt-out of these cookies. But opting out of some of these cookies may affect your browsing experience.
Necessary Always Enabled

Any cookies that may not be particularly necessary for the website to function and is used specifically to collect user personal data via analytics, ads, other embedded contents are termed as non-necessary cookies. It is mandatory to procure user consent prior to running these cookies on your website.