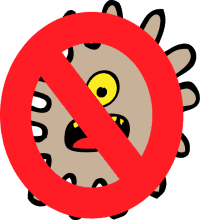 Recently, I’ve been reflecting on my youth and some of the best laughs I’ve had. When I was kid, fart jokes and your mama snaps tended to be entertainment in between playing Nintendo and trading sports cards. (“Your mama jokes” were especially popular after In Living Color aired their hilarious segments). However, if someone’s fart joke included a wise and humorous metaphor it could rival the hottest rap line du jour and send friends into a laughing frenzy. So when I recalled this question from my youth, I had to google it (since the Internet is now available).

First off, kudos to the researchers for posing the question and seeking the answer. The post begins with a video at airport security of a traveler ripping one in front of an infrared camera. If you want a good laugh, after watching the video, read the comments at the bottom of the same post: “Do Farts Carry Germs?…“

While there may be quite a bit of humor in the topic, it is a serious question and the answer may surprise you. The experiment found that a fart carries germs if the flatulator is naked, but may not if wearing clothes.

It turns out, the clothes act as some kind of filter that only lets the gas escape. Logically then, at the same time, whatever material is the acting filter will certainly get germy.

However, take a moment to consider germs on the outside of your pants at the moment you let one go. It is possible your flatulate–while maybe only gas–can sends those germs airborne, potentially harming and infecting those around you. I postulate that the potential may increase if located indoors, while if the flatulator and their party are outside, UV rays may keep the breathable air sanitized.

I’m not suggesting you don’t relieve yourself when you need to, just consider the science when you do. Stepping outside for a moment could prevent biological warfare.

What are some of your favorite jokes when you were a kid? Please share.

This website uses cookies to improve your experience while you navigate through the website. Out of these, the cookies that are categorized as necessary are stored on your browser as they are essential for the working of basic functionalities of the website. We also use third-party cookies that help us analyze and understand how you use this website. These cookies will be stored in your browser only with your consent. You also have the option to opt-out of these cookies. But opting out of some of these cookies may affect your browsing experience.
Necessary Always Enabled

Any cookies that may not be particularly necessary for the website to function and is used specifically to collect user personal data via analytics, ads, other embedded contents are termed as non-necessary cookies. It is mandatory to procure user consent prior to running these cookies on your website.